Accounting for gamers and streamers 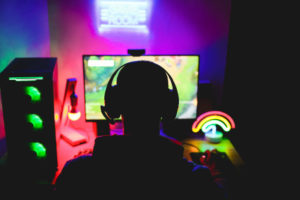 The world may have gone social media crazy, but those who use its platforms to make a living require the support of the same business services as any other company.

Social media influencers, personalities and online brand ambassadors often receive income from several different sources, at various times within the month, often in currencies from around the world. As such, they require bookkeeping and tax planning to maximise their earnings and ensure they are operating in an efficient way, today and into the future.

Dean Carroll is better known as AverageDad – a full time gaming streamer who’s also a parent and recently had a new addition to the family. Since 2018, Dean has been the face of AverageDad Media Ltd which, across multiple social media platforms, can reach thousands of viewers at any one point.

Generating income from multiple countries around the world as well as from different social media platforms, Dean required an accounting service which understood his business model, and which could help him plan for the future.

Dean said: “Working with various revenue sources and being paid in different currencies which have to be converted to pounds and is then subject to UK tax laws rather than the country the income has come from, can be very complex. To help manage that, I didn’t want a basic, everyday accountant – I wanted one which understood the world of social media and those that work within it, who could backdate all my accounts ready for a tax return, but also support me in preparing for a future house move and the arrival of my child.”

Champion Accountants is experienced in working with social media influencers and a member of our team happened to be one of Dean’s regular viewers. Understanding the task he might have ahead of him, Martin Frain from our Manchester office reached out to Dean directly, sharing some of the work we’d already conducted on behalf of those in the industry.

Dean explained the company was coming to its first year-end but hadn’t yet considered appointing an accountant to help him prepare his statutory accounts or file his tax returns.

In response, we provided him with comprehensive advice on how best to operate the business from an accounts and tax perspective, as well as what to expect in his tax return based on his projected first year earnings.

As Dean explained, the tenancy on his family home was coming to an end and that a house purchase and new baby were imminent. We arranged to shorten the company year-end and fast track Dean’s first annual accounts, collating all income and expenditure from scratch given there was no history of bookkeeping.

We then assisted in providing references and projections for a mortgage application based on only one year of accounts, turning the submission around in a matter of weeks to enable a speedy purchase of the property so Dean could capitalise on a previous buyer dropping out.

Dean said: “Champion have not only saved me a huge amount of time but they have got everything in order, so I am now completely confident that my tax return and savings are properly taken care of. Additionally, given I generate income from inside and outside of the UK, they’re ensuring that I’m compliant with the changing laws surrounding Brexit and VAT – something I hadn’t previously considered.

“I cannot credit Champion enough – they were able to achieve so much for me while my personal life was going through upheaval with a house move and newborn baby. They took that into consideration and made the whole process extremely easy for me. Everything I have asked of them has been done to the highest possible standards, and no request is too big for them.

“Because of my line of work, my home and professional life often overlap but Champion have granted me the luxury of extra time with my family, so I can’t recommend them highly or thank them enough.”

We're thrilled to announce that Adam Yardley from our Chester office and Max Kilshaw in our Preston practice have passed their #AAT exams!

Luke Evans from our Chester office also passed his AAT a few months ago, and has already passed his first #ACCA module.

From 30th September 2022, anyone using v26.2 and below of Sage 50 Accounts and Sage 50cloud Accounts will no longer be able to access their software.