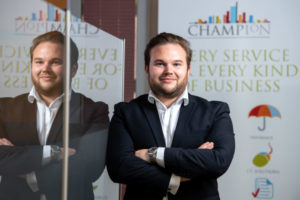 Champion Accountants has announced the promotion of a former audit and accounts trainee to Group Partner.

David Herd, 29, joined Champion’s Blackpool office in 2010 as a trainee, studying for his AAT qualification, before moving straight onto ACCA. During the last year of the certification, in 2014, David discovered a penchant for tax advisory and relocated to Champion’s Manchester office to work under the company’s group tax partner, Gill Molloy, where he qualified as a chartered tax adviser.

Since then, David has been integral to the growth of Champion’s tax advisory arm and has spearheaded the company’s Research & Development (R&D) Tax Relief, Land Remediation Relief and Stamp Duty Land Tax services. David and his team have to-date achieved a 100 per cent success rate for R&D, which has resulted in more than £45million of tax relief claimed for clients, whilst total revenue for the team has increased threefold due to a flurry of new appointments.

Appointed to the role in Champion’s 50th year in business, David’s promotion marks the company’s ongoing commitment to offer the next generation of accounting talent the best opportunities in the industry; and comes at the start of another new chapter in David’s life.

He said: “When I joined Champion 11 years ago, I was promised the chance to earn while I learn and the ongoing opportunity to train to truly succeed in my field. I’ve been lucky enough to work alongside some of the best in the industry who were happy to give up their time and share their experiences to help me succeed, and I would like to thank them for arming me with the knowledge required to reach this position.

“It’s been an exciting time both professionally and personally; I welcomed my daughter into the world just a few months ago and will soon be celebrating my 30th birthday. To have been appointed to the role of Group Partner before the age of 30 was somewhat of a dream of mine, and I put achieving it down to the incredible support I’ve received from the Champion team.

“I hope that in my new role, I’m able to inspire our many trainees that they, too, can step into such roles one day with the right backing around them.”

Ged Cosgrove, group managing partner at Champion Accountants, said: “Since David joined our team all those years ago, it was clear he had the type of ambition you don’t often come across. He was constantly spotting opportunities, but he didn’t just sit back and wait for other people to make things happen; he acted above his position to convert them into services that have been integral to the success and growth of the Group.

“There was no other role discussed when it came to David’s next steps and progression. We want him alongside us at board level, to help shape the future of Champion.”

We’re reminding clients who utilise the #furlough scheme that the Government’s contribution towards employee wages reduced from 1st July. Employers will now only be able to claim 70 per cent of employee wages. We explain more here: https://bit.ly/3xCIwhP

#Cryptocurrency is the buzzword of 2021 – but what is it, and how does it affect you? It’s growing in popularity as a way for businesses to sell goods and make profits, but what are the associated tax liabilities. We explore this more here: https://bit.ly/3ktrtea